The Adirondack Sky Center & Observatory is excited to announce that we are welcoming visitors back to the Roll Off Roof Observatory during the summer of 2021 for public events. Details can be found on this News page. Check Facebook for events on any clear night during the summer!

Please join us periodically for virtual lectures. Videos of each lecture are posted on our YouTube channel the day following the talk.

Due to rising COVID concerns, it is with great regret that we announce that the Astrophotography Conference 2021 has been canceled. 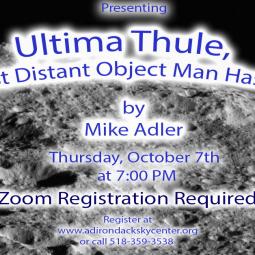 Ultima Thule is the most distant object ever visited at 4.1 billion miles away and the New Horizon’s spacecraft passed within 3500km of it on January 1. The object is shaped like a rocky snowman and spins like a lopsided propeller facing the sun, tilted 90° from its orbit plane and is about 22 miles long. Its scientific interest lies in the fact that it was likely formed at the time of the formation of the solar system 4.5 billion years ago but has seen little change since then. Thus it offers an opportunity to study the process by which planets were initially formed. The talk will explore the latest data from the mission and will also provide updates on the discovery of a buried ocean on Pluto.

The NASA Dawn space mission was launched in 2007 to explore two of the three proto planets in the solar system, Vesta and Ceres which are located in the asteroid belt between Mars and Jupiter. Ceres contains 200 million cubic kilometers of water in its mantle which is more than all of the fresh water on earth. Vesta is 220km in size and in contrast is a water poor world with a metallic iron nickel core. In this talk the detailed images of these asteroids will be presented and the very interesting geography and geology of both asteroids will be discussed. Vesta for example has some massive craters with one called Rheasilvia being 19km deep with a central peak 23km above the crater floor.

The last part of the talk will be about the ESA’s Rosetta mission to the comet Churyumov–Gerasimenko. It is the only mission to orbit a comet and it was able to study the comet as it moved towards the sun. One of its notable results was determining that the comet has a Deuterium to Hydrogen ration 3× higher than on earth. This strongly indicates that earth’s water is not likely to have come from comets.

Mike Adler graduated from MIT in 1971 as a PhD in the area of solid state physics and worked at General Electric from 1971 until his retirement in 2000. He has given talks on a number of topics in astronomy, geology, climate change, and travel to groups in New York, the Royal Astronomy Society of Canada in Ontario and the Geologists of Jackson Hole in Jackson, Wyoming.

Please register for this Zoom talk using the button below. You will receive an email containing a link to the presentation that is unique to you and should not be shared with others.