On Monday, August 21st, observers in the continental United States will experience a total solar eclipse for the first time since 1979! A total solar eclipse occurs during the New moon phase, in which the Moon passes directly in front of the Sun, as seen from Earth. The Moon’s shadow creates a path of darkness on the surface of the Earth. We are fortunate that the size of the (much closer and smaller) Moon in the sky very closely matches that of the (much further and larger) Sun, so that when they do align, some locations on Earth will see the entire solar surface obscured.

If you’re wondering why we don’t have a solar eclipse every New moon (and, conversely, a lunar eclipse every Full moon), it’s because the orbit of the Moon around the Earth is tilted by 5 degrees with respect to the Sun’s path in the sky. The result is that solar eclipses are relatively rare, since the Moon can be slightly above or below the Sun in the sky, where no eclipse occurs.

The path of totality, where observers on Earth will see a total eclipse, crosses the center of the U.S., stretching from Salem, Oregon on the west coast, through Kansas City, Missouri and Nashville, Tennessee, and then finally leaving the east coast at Charleston, South Carolina. The rest of the continental U.S. will see a partial eclipse, with a significant fraction of the Sun occluded. Viewers in the Tupper Lake area will see about 63% of the Sun’s surface blocked by the Moon, so it will still be a remarkable sight! The image below is a simulated view of the Sun’s appearance as seen from the APO at the peak of the solar eclipse, around 2:39 pm! (Image created with Starry Night Pro Plus 7.)

You can get much more info about the Great Solar Eclipse of 2017 on the web by visiting NASA and Eclipse2017.org.

The APO will hold a free observing event on August 21st, from 12:30 to 4:00 pm – weather permitting, of course! We will have solar telescopes and eclipse glasses available for safe solar viewing. There will be educational materials, games and prizes as well. This will be an exciting event for the entire family, so wish for clear skies! 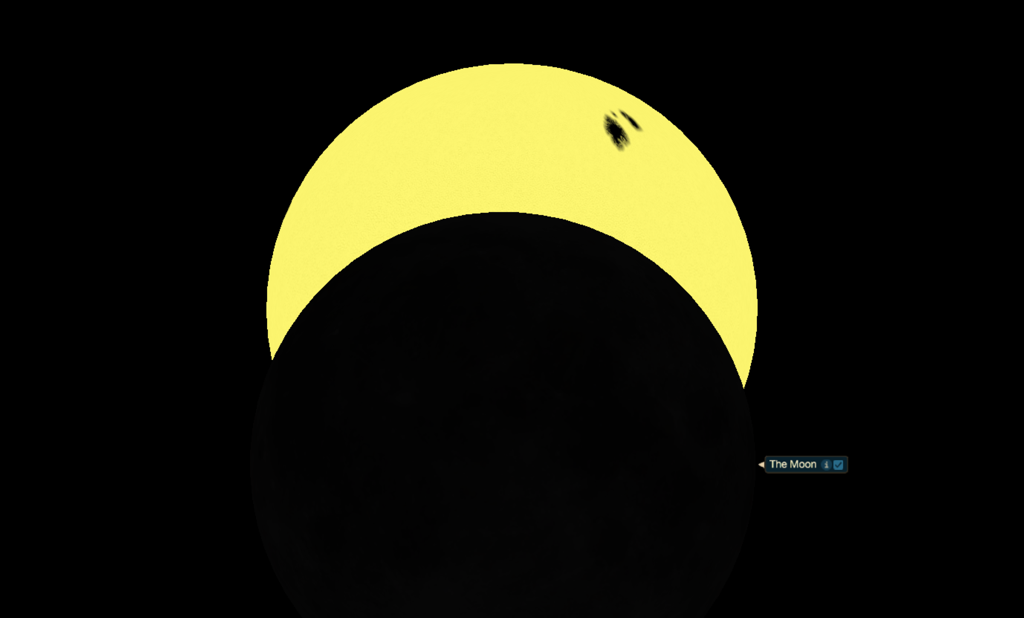